Space for Giants is an international conservation organisation that protects the great landscapes that Africa's remaining wildlife needs to survive and thrive. These landscapes give homes to giants, but they also bring great value to people and nations: biodiversity, livelihoods and enterprise, new medicines, carbon storage, even the very oxygen we breathe. But they are under threat.  Endangered animals are trafficked globally for tusks, horns, scales and skins, forcing them ever closer to extinction. Farmers needing more land to feed their families expand into wildlife habitat. When wild animals then damage their crops, they retaliate.

Space for Giants works across 10 countries in Africa to progress their mission to protect the natural ecosystems on which Africa’s large wild animals depend and ensure they are valued by people so that they endure, forever.

Together these countries are home to over three-quarters of Africa’s 415,000 remaining elephants and within them one of the most important ecosystems for the future of those elephants is the Kavango-Zambezi Transfrontier Conservation Area (KAZA). 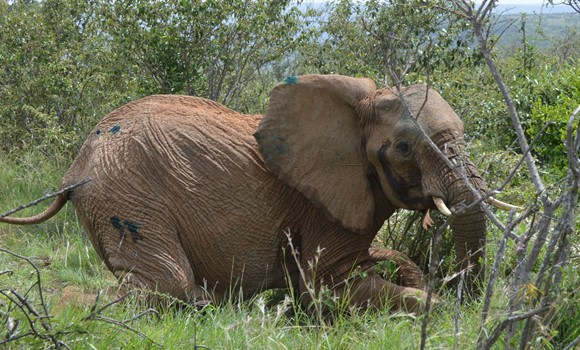 Covering an area of 520,000 km2, KAZA is Africa’s last great wilderness and home to over 200,000 elephants. Once Africa’s largest sanctuary for elephants, parts of KAZA have experienced some of the worst poaching levels found anywhere on the continent at the hands of organized transnational criminal syndicates.  For elephants, KAZA is now the last stand and part of the solution to securing a future for KAZA’s elephants lies within southern Angola.

Sometimes you think you are facing insurmountable odds and question whether what you are doing is really having an impact on these large and intractable problems. It makes all the difference to feel the support coming from around the world and to know that there is a whole community of people who are part of this. And then you take a step back and take a moment to be amazed to see the elephants we collared alive and well, traversing their centuries old routes where there are no national borders!

Angola’s elephants and wildlife suffered greatly during the prolonged periods of civil war that started in the 1970s. Before the civil wars Angola was thought to host around 70,000 elephants (both forest and savannah). Throughout these wars, elephants were hunted by armed rebels and local communities alike, both for meat and for the lucrative ivory trade. By 1989 elephant numbers were assessed to be fewer than 8,000 with the last stronghold in the southeast.

Angola has worked hard to restore wildlife and restructure its protected area system. Space for Giants’ intervention has been very valuable. Collaring elephants greatly helped understand their movements and improve strategies for combating poaching. Creating the rapid intervention unit will enhance Field Rangers’ ability to act against poachers. Space for Giants has demonstrated their commitment and their determination to support our Protected Areas System

In September 2019 Space for Giants conducted a strategic elephant collaring operation in the southeast of Angola. Similar to findings of surveys from 2015, they encountered huge elephant herds of more than 300 individuals indicating stressed individuals coming together for safety.

Angola’s elephants remain at risk and could ultimately disappear from this landscape without immediate action. With elephants facing such a serious situation, Space for Giants set out to help secure a future for KAZA’s elephants with the first step of improving the security situation in southeastern Angola. Funding from ICAP Charity Day 2019 supported Space for Giants with this work.

In order to combat wildlife insecurity in Angola - with a focus on these vital elephants - Space for Giants, in partnership with the Instituto Nacional da Biodiversidade e Areas de Conservaçã0 (INBAC), is training and deploying four intelligence led Special Operations Units (SOUs).

Work started in November 2019 a pre-selection exercise was conducted in order to recruit the 30 most capable rangers from existing INBAC Field Rangers spread across Angola’s National Parks. In total 7 different National Parks were visited and a really strong cohort of potential rangers were found.

The Covid pandemic slowed our progress as Angola’s borders were unfortunately closed for most of 2020 but the Space for Giants trainer is now on the ground and will have the first groups of rangers undergoing training by June 2021.