The ICAP Sounds of South East project supported by ICAP Charity Day 2014 in London is an innovative programme designed to improve young people’s musical ability as well as develop them socially and personally. It provided young people with progression opportunities in singing, performance, composition and recording across all styles of music at recording studios and youth clubs. The ICAP Sounds of the South East project has made a major impression on the local community, parents, carers and most of all young people who attended the project.

The below film showcases the incredible work that took place as part of the Sounds of the South East project.

The Sounds of the South East has characterised this commitment to work with their local community. Students have worked with major cultural organisations such as Portsmouth Cultural Trust, The New Royal Theatre and SoCo Music. Project directors have also been invited to sit on the Portsmouth Cultural Partnership (PCP) group which aims to nurture and develop the cultural life of the city and increase participation in the arts. Participants have presented at four conferences on youth crime and justice and have delivered training to the police on how to interact with young people.  Over the course of the year, the project increased its participation so that all postcodes in Portsmouth were represented. This was particularly significant as many of the young people in the city have strong territorial attitudes and other than in a school environment there can be little integration between those living in different areas.

We’re incredibly grateful to ICAP for supporting our ‘Sounds of the South East’ project. As some of the young people participating in the film accompanying this report say, it didn’t just change their lives, it saved them. Others had a life-changing experience that they will carry with them forever. Their new-found confidence will boost their educational and career prospects and have a hugely positive impact on their future. Thank you ICAP for helping us to achieve this. With your annual ICAP Charity Day, you’ve led the way in showing how corporate support can help change lives.

Over the lifetime of the project, 1,131 young people took part in taster sessions whilst a further 991 young people became core participants on the project. Over the course of the year, 57 singers performed a solo in front of the group. The average time taken between joining and performing a solo was just eight weeks. Many participants spent the first few weeks lip syncing until they found the courage to be heard first by themselves and then those around them. This is fostered by the ‘family’ environment of the project, where everyone is willing each other to do well. Participants headlined at the Southsea Bandstand, the Fratton Family Festival, with others being invited to perform at the 2016 Victorious Festival.

There is a non-competitive spirit which encourages the young singers to develop at their own speed and confidence levels with no pressure around ability, just the encouragement from everyone to be the best you can and have fun whilst learning.

Sounds of the South East regularly came across the issue of bullying. Chloe, who featured in the video, was severely bullied at school and as a result started self-harming on a regular basis before attempting suicide.

Accessing and engaging young people through music Chloe arrived at the project with a little black book where she had written down all her feelings. This book was a catalyst for her to begin writing hip hop lyrics. Over the project Chloe wrote and recorded prolifically. The change was astonishing. Chloe was a very good rapper and immediately earned the total respect of the group. The group in turn addressed their language and behaviour to respect the fact that there was a very young lady present. As part of this project Chloe recorded a track with renowned British rapper English Frank; met and free styled with MicRighteous, Nate, Genesis Elyjah and Logic. By the end of the year the project got nominated for an award by Prince Charles’s charity Business in the Community. Chloe and another young rapper called Matt were invited to perform at the Royal Albert Hall in front of over 1,000 of the country’s top businesses at the award ceremony. Chloe went back to school and went from a D-E grade to an A-B grade student. Chloe is now 16 years old and has set up her own charity called ‘beat the bullies’. She has secured funding from 02 and a handful of local businesses. Chloe has won several national awards for her work. In 2015 she caught the attention of Ed Sheeran who was also bullied at the same age. When the two met, Ed said he was “in awe of Chloe”.

Chloe’s beat the bullies track can be viewed here.

Two separate surveys were completed by the young people who took part. The first survey was completed in June 2015, and out of 40 respondents, 87% expressed an improvement in confidence after joining the project. The second survey with 93 participants revealed similarly impressive results: 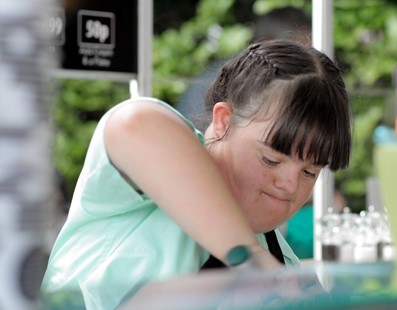